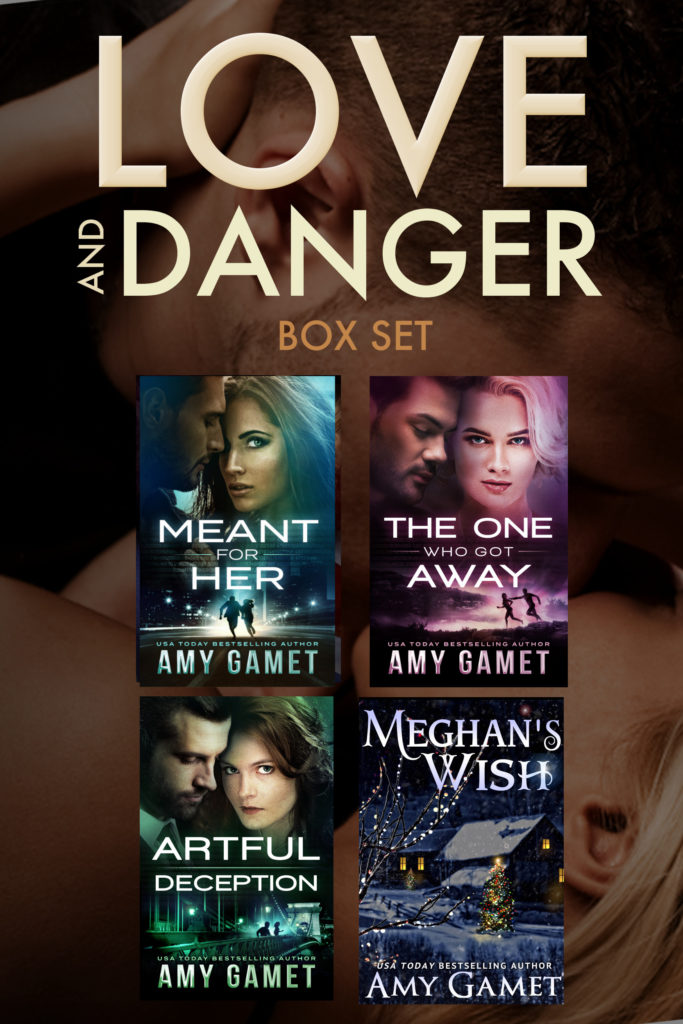 Book 1: Meant for Her

Julie Trueblood's name is found alongside an encrypted message in the safe deposit box of a dead man, bringing Navy investigator Hank Jared to her door, looking for answers. The daughter of the most infamous spy of the twenty-first century, Julie denies any knowledge of the man or the cipher and sends Hank away.

Hank is supposed to be in the Adirondacks walking his sister down the aisle, not chasing leads on a John Doe murder investigation that doesn't even appear to be Navy-related. He's a military man through and through, and while an order is an order, he hasn't given up hope of finding a way to make the ceremony. When Julie contacts him and says her life is in danger, Hank finds the perfect place to hide her, right by his side, pretending to be his girlfriend at his sister's wedding. Now he just needs to remember their relationship is all an act.

Sparks fly between Hank and Julie as they defend against a hidden enemy and seek out the truth in this deadly game of cat-and-mouse. The coded message brought them together, but its secrets hold the power to tear them apart. Guided by her generous and quirky Aunt Gwen, Julie will gather the courage to unravel the cipher that was meant for her to decode, as she learns to trust the man she was meant to love.

True love can always be rekindled...

Meghan O'Connor's daughter Fiona needs a bone marrow transplant, forcing Meghan to return to the family she ran away from as a pregnant teenager. She's afraid they won't forgive her for leaving town with Liam Wheaton, the boy they tried so hard to keep her away from, a wanted criminal and the father of her baby.

She'd thought he was innocent, framed by another boy in town. Years passed before the truth was revealed, sending Meghan running again, this time with her daughter. They stayed away until Fiona's illness forced them back home to Largo. Meghan never expected to find Liam there, looking sexier than ever and mad as all hell.

Largo sheriff Ricky Powell has always had it in for Liam, all the way back to second grade when it was clear a young Meghan preferred to sit next to the son of the town drunk instead of him. Now Meghan's back in town and Ricky's determined to bring Liam down once and for all--even if it means signing Fiona's death-warrant.

Book 3: The One Who Got Away

Artist Gwen Trueblood is shocked to discover her husband David's accidental death was actually premeditated murder. Almost as troubling is the revelation that he was in the Witness Protection Program, making Gwen question how well she knew her husband at all. Only one person can give her the information she needs, but he's the very last person on earth Gwen wants to speak to.

U.S. Marshal Colin Mitchell was like a brother to David Beaumont when they were growing up, until Colin realized he and his friend's fiancé shared an almost cosmic connection. When Gwen has a spicy daydream and Colin experiences it right along with her, it's too much for him to resist. He makes a move that ultimately costs him both the woman he loves and his relationship with David.

Colin was in charge of the investigation into David's death, and he can't believe he let the other man's killer get away. The case is reopened, bringing David's murderer out of hiding and putting Colin and Gwen directly in the path of evil itself. Together they must discover the truth of what happened to David, as they struggle to come to terms with the passionate attraction that's been smoldering between them since the fateful daydream years before.

The family he has no way to rescue... The woman he has no right to love...

Undercover FBI agent Rowan Mitchell married Tamra de Toffoli because he believed she was carrying his baby. The truth was far more sinister, and on the day Rowan asks for a divorce, Tamra and the baby are kidnapped and the painting he was assigned to protect is stolen.

Becky O'Connor sees the story on the news and recognizes Rowan immediately. Their brief meeting months earlier left an impression--of a very sexy man who had no right to be looking at her like that if he was married to someone else. Becky comes to Rowan's aid and is quickly drawn into a deadly search that will take her to the edge of right and wrong, where true love awaits those who dare to accept it under any circumstances.