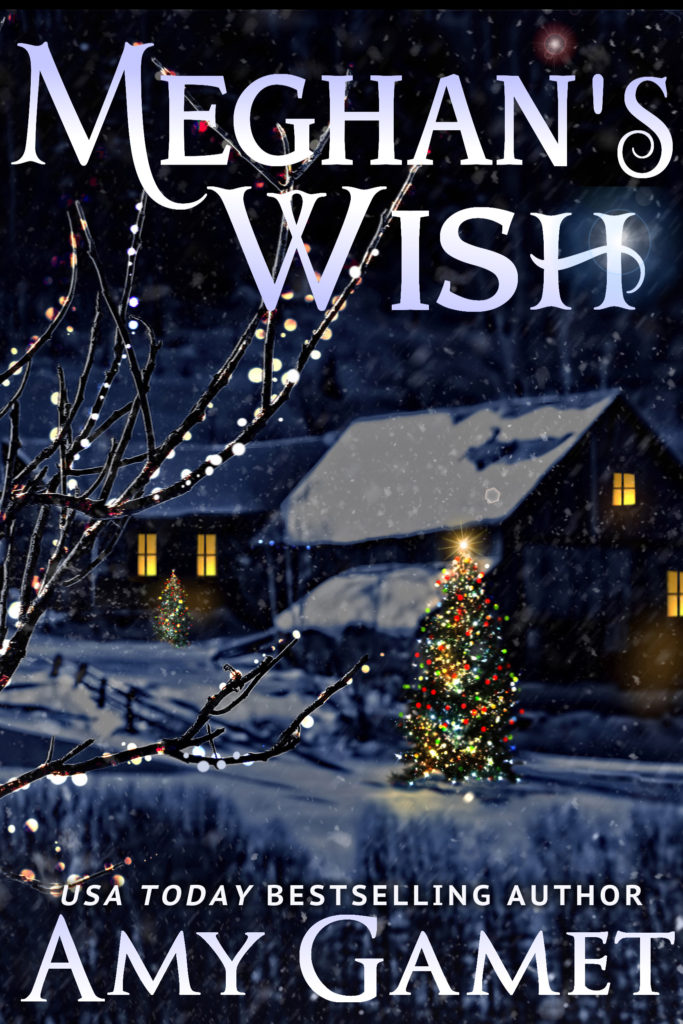 This Christmas, a lonely man will find true love, a sick child will regain her health, and a young mother will learn the power of forgiveness...

Meghan O'Connor's daughter Fiona is ill, forcing Meghan to return to the family she ran away from as a pregnant teenager. She's afraid they won't forgive her for leaving town with wanted criminal Liam Wheaton, the boy they tried so hard to keep her away from and the father of her baby.

She'd thought he was innocent. Years passed before the truth was revealed, sending Meghan running again, this time with their daughter. They stayed away until Fiona's illness forced them back to Largo. Meghan never expected to find Liam living there, looking sexier than ever and mad as all hell.

Largo sheriff Ricky Powell has always had it in for Liam, all the way back to second grade when it was clear a young Meghan preferred to sit next to the son of the town drunk instead of him. Now Meghan's back in town, and Ricky's determined to bring Liam down once and for all, even if it means signing Fiona's death warrant.

Meghan O'Connor had been in love with Liam Wheaton since as long as she could remember.

Her parents had done what they could to stop it, carefully erasing his name from the birthday party invitation list and failing to pass on phone messages when they intercepted his calls. But Largo was a small town, with only one class at each grade level, and ten months out of the year Liam and Meghan spent six hours a day together.

There was talk of sending Meghan to boarding school at Saint Catherine's, but in the end Tom O'Connor couldn't justify the additional expense, just to get his daughter away from Chip Wheaton's son.

Chip was a drunk, and a mean one at that, who could be found at The Well any night of the week. He worked at the quarry, or doing construction, in-between layoffs and being fired time and again. His wife Lindsay cleaned houses and cared for the couple's five children, who always seemed a shade dirtier and a tad more disruptive than the other children of Largo.

Liam was the oldest. He got a job as a stock boy at the Super Duper when he was fourteen, and the townspeople could often be heard commenting on how clean and polite he was for a Wheaton.

Meghan didn't care that Liam was a Wheaton. All that mattered to her was that he was gentle and kind, going out of his way to make sure she was happy, and flashing his devil-may-care smile to cheer her up when she was not.

He had the darkest brown hair and strong, handsome features, marred by a razor-thin scar that ran from his left ear to his chin. His father had crashed the family sedan into a maple tree when Liam was five, propelling the unrestrained boy face-first through the windshield.

Meghan thought the scar made him look like a warrior.

For the most part Liam was quiet, keeping his smart wit and quick temper hidden from those who didn't like a fast tongue on those they look down upon. He excelled in school, but with the future before him like so much blank paper, Liam knew only that he wanted to spend it with Meghan.

He only got in serious trouble once, when Ricky Powell asked Meghan to go with him to a dance and she said no. Ricky touched her face and called her a bitch who'd rather go slumming with trash. Liam broke Ricky’s nose in two places.

The pair signed up for track and field instead of soccer so Liam didn't have to buy cleats and a ball, and when Meghan tried out for a part in the school play, Liam volunteered as a stage hand. It was after a performance of My Fair Lady, in the heavily draped wings of the stage, that they shared true love's first kiss.

Patty O'Connor didn't miss the high flush on her daughter's ivory cheeks, nor the newfound spring in Meghan's step. Patty was in the crowd when Liam broke the school record for the hundred meter dash, and saw Meghan embrace Liam like only a woman holds a man.

A shocked Patty could feel the eyes of the other parents upon her, shame covering her like fire, wishing the bleachers would give way beneath her just to draw attention away from that filthy embrace.

Meghan was taken out of track and field, and the theater troupe, and her father sat her down to explain exactly what kind of people the Wheatons really were.

Meghan seemed to take his words to heart.

Saint Catherine's was called, only to find that the nuns were in the process of shutting down the school due to poor enrollment.

Patty marched a mortified Meghan into the principal's office at school, and Meghan shriveled as she listened to her mother reprimand the administrator for allowing Liam Wheaton to get his grubby paws on her innocent daughter. Well aware on which side his bread was buttered, the principal gave Liam his own private lunch table, away from his classmates, and Liam's desk was moved to the opposite side of the classroom.

It was a full year before her mother sent Meghan back to the Super Duper.

“I need eggs for the casserole, and I can't walk away from these,” she said, gesturing to several pots bubbling on the stove. Patty exhaled loudly, staring at her daughter. “Go to the store. And no funny business, young lady. Do you hear me? If that Wheaton boy is there, you ignore him. Not a word.”

Meghan's bike flew down Main Street as fast as her feet could pedal, her dark hair blowing behind her in the breeze. All the way there her heart pounded in her chest, her hands gripping the handlebars too tightly as her emotions raced in anticipation.

They hadn't even spoken since the fateful track meet, the adults keeping a close watch on them at every turn. Meghan pulled her bike up on the curb, hastily snapping the lock and running inside. She scanned the aisles one by one until she found him, his long body reaching onto a high shelf.

She bit her lip as she started toward him. “Liam,” she called out lightly, and his head snapped up.

His eyes held hers, devouring her, setting her belly to tingling. “Meggie.”

“My momma let me come buy some eggs.” What a stupid thing to say, but it didn't matter, because they were together again, face-to-face.

“I've missed you,” he said, his eyes falling to her lips.

Meghan felt herself flush, loving the sound of his words after so much silence. “Meet me,” she said quietly.

He took a purposeful step toward her. “The old powder mill, by the river.”

She had heard stories about what went on there. Dirty stories about men and women and what they could do to each other. She felt dizzy, even as she nodded her consent. Anything to be close to Liam. “When?”

Her parents were going to a concert, and Becky had a sleepover at a friend’s house. “I'll be there.”

And so it was that Meghan O'Connor and Liam Wheaton made love at the old powder mill, the summer they turned sixteen. When Meghan slipped from Liam's arms and raced to beat her parents home, she had no idea that two great changes were about to take place, that would alter her life forever.

A new life was forming in her belly, and the old powder mill was about to go up in flames.