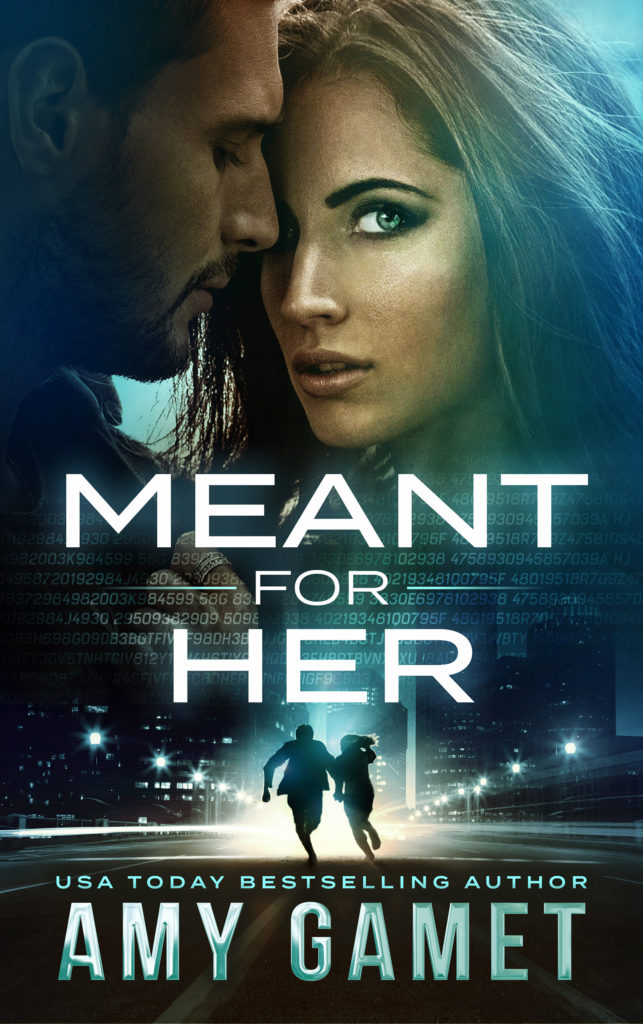 Julie Trueblood's name is found alongside an encrypted message in the safe deposit box of a dead man, bringing Navy investigator Hank Jared to her door, looking for answers. The daughter of the most infamous spy of the twenty-first century, Julie denies any knowledge of the man or the cipher and sends Hank away.

Hank is supposed to be in the Adirondacks walking his sister down the aisle, not chasing leads on a John Doe murder investigation that doesn't even appear to be Navy-related. He's a military man through and through, and while an order is an order, he hasn't given up hope of finding a way to make the ceremony. When Julie contacts him and says her life is in danger, Hank finds the perfect place to hide her, right by his side, pretending to be his girlfriend at his sister's wedding. Now he just needs to remember their relationship is all an act.

Sparks fly between Hank and Julie as they defend against a hidden enemy and seek out the truth in this deadly game of cat-and-mouse. The coded message brought them together, but its secrets hold the power to tear them apart. Guided by her generous and quirky Aunt Gwen, Julie will gather the courage to unravel the cipher that was meant for her to decode, as she learns to trust the man she was meant to love.

Snowflakes began to fall as Kelly and Ron waved goodbye from the window of the white stretch limousine, a large “Just Married” banner hanging from its trunk.

Hank stood in the cold and watched the tail lights disappear into the night. Norah and Steve had headed home an hour earlier, anxious to get back to their lives in Boston.

That meant there was another bedroom available at the house, if he chose to use it. Hank suspected Julie would share his bed tonight if he asked her.

He knew it was wrong to sleep with someone he was protecting as an officer of the Navy, someone who might be involved in this case more than he would like. Hell, who was he kidding? She was definitely involved. It was just a matter of degree. Hank shivered in the cold and cursed the situation.

The church doors behind him opened and closed.

Julie Trueblood had gotten under his skin, maybe even into his heart. How the hell had that happened? Why did it have to be this woman who affected him so strongly?

He turned to see her standing on the steps of the church, her blue dress swirling in a light breeze, snowflakes twirling in the air between them.

He would remember this moment always—how she looked—how it tore him up inside. “Merry Christmas, Julie.”

“Your mom needs some help loading up the car.” Julie opened the church door and waited for him to come inside. “Kelly and Ron get off okay?”

“It was a good day,” she said, smiling at Hank and resting her hand on his back as they headed downstairs together. “You did good, Hank.”

“We all did.” They reached the bottom of the stairwell and Hank held the door for her.

An hour later, the group walked into Marianne’s kitchen. Julie slipped off her high heels and covered a yawn. “I’m exhausted.”

Julie’s head snapped up at his suggestion. “I need a few minutes to unwind.”

Marianne opened a cupboard and withdrew a round bottle. “Nightcap, anyone?”

“Chambord,” said Gwen appreciatively as she pulled back a chair. “Absolutely.”

“Why not,” said Hank, closing his eyes.

“If you’re tired, you can go ahead,” said Julie.

Marianne stifled a laugh as she poured the drinks into cordial glasses. They were a heavy cut crystal in pale pink, each one shaped like a tiny vase.

“Marianne, these are precious,” said Gwen.

“They were my mother’s.”

Hank thought of the china cabinet in the dining room, chock full of crystal, and wondered how long the women were going to stay up.

Julie rubbed her neck with her hand, and Hank saw his opening, walking behind her to rub her shoulders. She made little sounds of pleasure as he worked her tired muscles, her skin warm and smooth beneath his strong hands.

“Sure you don’t want to go to bed?” he whispered in her ear.

Julie straightened her shoulders abruptly and lightly shook off his hands. He stepped away, his ego stinging from her response.

Once upstairs, he undressed in a huff. Hank had wrestled with his conscience and fully committed himself to breaking the rules, only to realize that Julie had no intention of coming to bed with him.

What kind of game was she playing? It seemed her affection was directly related to the size of their audience. He shouldn’t have listened to his mother. He had been right all along. Julie was playing the role he had asked her to play, and was not interested in a real relationship with him.

“Stupid, stupid, stupid,” he said to himself as he stepped into the shower. He let the hot water run over his head and flow down his face before he grabbed a bar of soap and worked up a heavy lather on his arms and chest. His mind replayed their kisses outside the reception hall and his body responded to the memory.

Was she really just pretending? Hadn’t she felt even a portion of what he felt?

The rest of his body got the same punishing treatment with the soap before he turned off the water and hastily dried his body. He was a grown man, damn it, and these games were making him crazy. Hank pulled on a clean pair of black briefs and considered grabbing a T-shirt and shorts out of deference to Julie.

She can close her damn eyes if she doesn’t like it.

Throwing back the covers on the bed, he dropped onto the cold sheets and waited for her to come in. It was nearly an hour before she did—time that did nothing to improve Hank’s mood. He watched as she closed the door as quietly as possible and tiptoed into the room.

“I was starting to think you were sleeping on the couch.”

In the darkness he saw her straighten to her full height. “I was talking with your mom and Gwen.”

“You were avoiding coming to bed with me.”

She didn’t answer him.

“Why, Julie?” His eyes were adjusted to the dim light of the room, and he saw her cross her arms over her chest as he waited for a response. When none came, he asked again, “Why are you avoiding me?”

She snapped at him. “Because you don’t really like me anyway, and I don’t want to sleep with someone who…”

“Whoa, wait a minute. I don’t really like you anyway? What are you talking about?” Hank swung his legs out of bed and walked toward her.

She stepped backwards and bumped into a dresser. “This whole charade. You pretending to like me.”

Hank reached out and stroked his hand down her arm.

“Please don’t touch me,” she said, recoiling. “I’m trying to make you understand.”

“I understand. You think I don’t like you like a man likes a woman, but you’re wrong.”

Now he was confused. He furrowed his brow. “Go ahead.”

“You want to have sex with me, but you don’t really care about me.”

Julie let out a huff and moved to step around him.

His hand on her arm stopped her. “Wait.” His fingers trailed slowly down her arm. “I do care about you.” He stepped closer, his scent invading her senses. “Enough to get involved when every rule the Navy has, and every rule I have for myself, tells me not to.”

His words lulled her closer, tempting her with their promise. Her shaking fingers skimmed his chest, reaching higher until her hand curved around his broad shoulder. With the lightest pressure she pulled him to her, his mouth finding hers with unerring accuracy in the darkness.