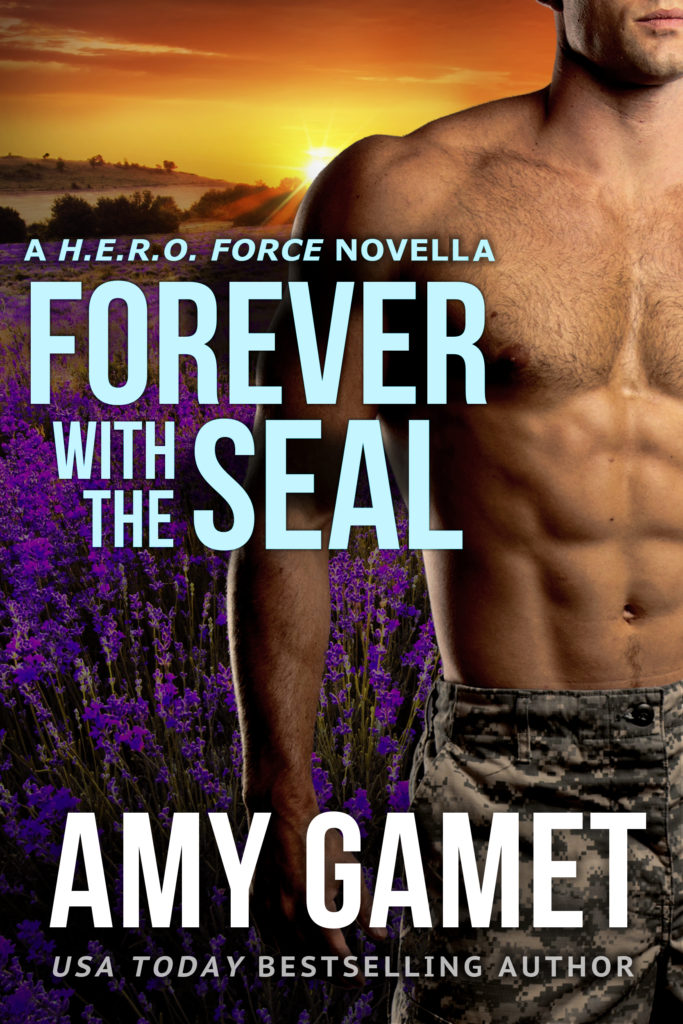 Trevor “Hawk” Hawkins and Olivia Grayson are finally going to marry, but she’s finishing up a film before they say “I do.” When someone starts stalking her, Hawk must go overseas to protect the woman he loves—but a ghost from his past may draw him away from HERO Force forever.

This is a novella, not a full-length book.

I never should have left her alone.

The damning words pierced Trevor Hawkins’ consciousness like a scalpel, evidence surrounding him as if he were on trial. Her makeup was scattered across the floor. A mirror broken and shattered. Her purse and phone abandoned in a corner.

Not in a million years.

He squeezed his head, one hand on either side, as he tried to make sense of the scene in front of him. Her dressing room was in disarray, a mess completely out of character for the woman he loved, and self-recrimination echoed in his mind.

He should have been here with her, damn it. He knew she was scared to death because someone was stalking her. She was his fiancée, for God’s sake, and he’d stayed in Atlanta months longer than necessary instead of rushing to her side to keep her safe.

And now I’m too late.

It was his love for HERO Force that had kept him away, his passion for the job outweighing what should have been of paramount importance, and he cursed himself for it. The Hands-on Engagement and Recognizance Operations team had been his family long before he met Olivia, the high-risk missions like heroin to a junkie’s veins.

He wanted it. Needed it, above all else.

But her film was shooting in France. He couldn’t do his job and be there for her at the same time.

Sweat broke out on his forehead.

How many times had he watched his father put the job before his family? Hawk still remembered what it was like to search the stands from one side to the other just to see if his father had shown up for a game. But Frank Hawkins was a detective on the homicide squad and there was nothing young Trevor could do to compare with that.

He’d been keenly aware of how much it hurt his mother, and he’d wished he was bigger and able to do something about it.

Now you’re bigger and just as stupid as he was.

Olivia was going to be his wife, and the role of soon-to-be husband was already conflicting with the man he considered himself to be. He needed to get his shit together. Make a change.

Could he live with that kind of sacrifice?

He shook his head to clear it. He couldn’t live without her. The job paled in comparison to his need to have Olivia by his side.

They’d been inseparable from the moment his car careened into hers on that snowy mountain road until she left for France, the last month and a half without her ranking as some of the longest days of his life. He’d step into the apartment they shared and be struck by the emptiness inside, the lack of energy, of happiness, of love.

But you didn’t notice when you were on a mission, did you?

He could see himself in fatigues, rushing a target, his weapon solid in his hands. The high of adrenaline. The focus. The testing of skill.

But he remembered something else, too. The sultry look in Olivia’s eyes as she stood barefoot in their kitchen, easily convincing him to be late for work just one more time. Or the way she felt against his body, tucked tightly into the crook of his arm as they talked deep into the night.

He’d told her things he never dreamed would cross his lips, wanted her to know pieces of himself he’d never shared with another. When they made love, it was as if those pieces wove together every bit of his being with hers, their souls tethered by the tapestry they were making from one moment to the next.

He was a better man when he was with her, and he’d been a fool to let her out of his sight. He would make the sacrifice he needed to make, that he should have made weeks ago.

He would let his brothers go.

That’s what HERO Force was. His family.

You’ve got to find her first.

He crossed to her dressing table, dropping onto the white fur-covered seat, his eyes unfocused. He saw the fat man standing in the doorway out of the corner of his eye. He’d damn near forgotten the bodyguard was there.

Hawk’s bicep flinched as he shifted his gaze back to the fat man. “Where is she?” he ground out in a voice he barely recognized as his own.

“I do not know,” the man said, his English heavily accented by his native French. “En décor?”

Hawk stood, frustration like a pure source of energy capable of catapulting him across the room. “What does that mean?”

Hawk pointed toward the set he’d cut through on his way to her dressing room. “She’s not there.”

“No, monsieur. The village set.” He gestured in the opposite direction.

Hawk took off at a run.

Would he be so lucky? Was it possible she was shooting a scene close by and all his worry had been for nothing?

All night as his plane flew over the Atlantic, he imagined horrible things that could happen to her. Maybe his imagination had run away with him.

The path he was on led to a wide-open area. In the distance he saw what looked like a village street straight out of a history book. He continued to run, squinting against the sun. He’d had sunglasses at some point. God only knew where they were now.

She came into view, on the street surrounded by cameras and other people, and his galloping heart slowed with his feet as relief washed over him.

Nothing bad had happened to her.

He broke out in a grateful smile and froze, his eyes narrowing.

There was a man on his belly atop a nearby building, his head peeking over the edge.

Hawk was in motion, his legs once again pumping, propelling him faster than he knew he could go. The figure’s pose was all too familiar to Hawk from his military career, a favorite of snipers the world over.

He was too far away to see if the man had a gun, but his instincts sensed the danger in the air. The weapon came into view. A rifle of some kind.

He scaled a metal ladder that ran up the back of the building just as a shot rang out. It was all happening too quickly, completely out of his reach, out of his control. Another shot.

He climbed the rest of the way and pulled his weapon on the sniper. “Put down the gun, asshole!”