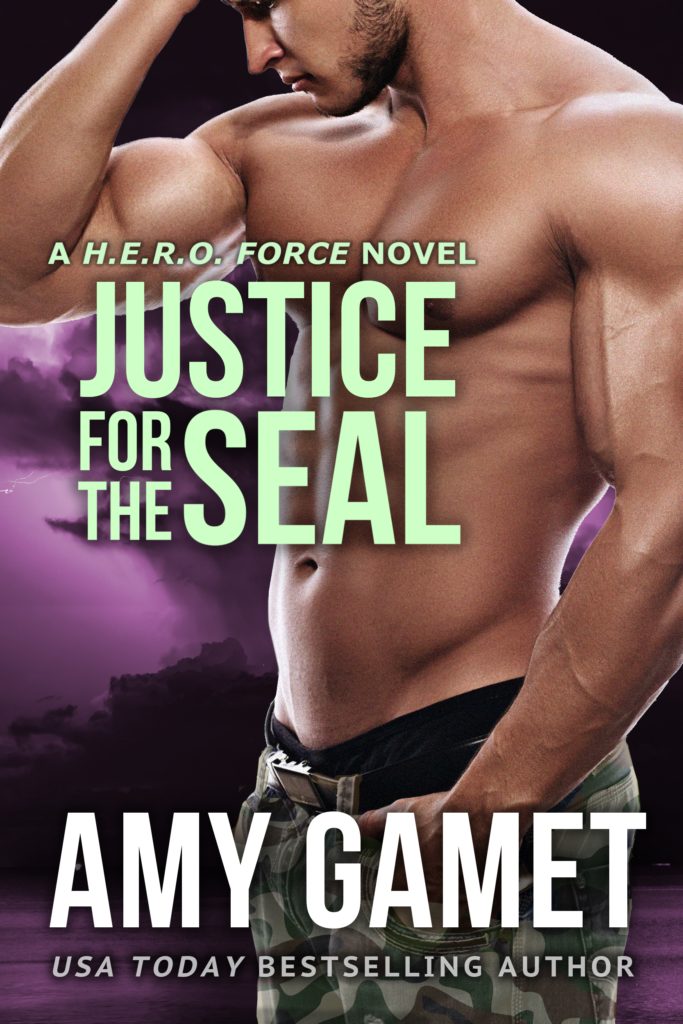 Logan O'Malley has an affair with an older woman, only to learn she's the judge assigned to the case that could end HERO Force forever. Worse yet, an old villain has come back looking for his own brand of justice, and the judge is about to be caught in the crossfire.

Logan O’Malley worked for a bunch of assholes.

He picked up his tequila and swirled it in a circle, staring into the liquid like it had the power to turn back time, to make him forget the things he’d heard that had knocked his world off its motherfucking axis.

Jax and Cowboy had killed a Navy SEAL. One of their own employees. An original member of HERO Force named Garrison Cole.

He downed the rest of his drink in one gulp.

He could see now how stupid he was for looking up to them. How childish.

Jax and Cowboy had sat him down in Cowboy’s office, shutting the door even though the rest of the team was on a mission in Dubai. There was a lawsuit, Jax said. A civil case against the two of them for wrongful death.

But it was his face that fucked with Logan’s brain.

Jax registered no emotion while he recounted the story of Cole’s death. None at all. The leader of HERO Force was nothing if not pragmatic, but he could have been talking about a broken fax machine or running out of copy paper.

He was downright icy, and Logan had been filled with unease. No.

The bartender poured him another drink.

Logan wasn’t usually a guy to go with his gut. Analytics and proof, rational thought and logic. Science. But sitting in that room listening to Jax had his inner empath screaming.

Jax and Cowboy fucking killed one of their own guys.

Logan probably wouldn’t have found out about it at all, except now they needed his help.

Well, they didn’t need it, exactly.

The crack of a cue ball was followed by the thud of balls dropping into pockets and Logan’s eyes focused on the liquor bottles on the shelf in front of him. The bar smelled like cigarettes from a time when smoking had been allowed. It was stale and foul, just like his meeting an hour ago, the air conditioning barely cooling the humid air.

After the mind fuck of a meeting with Jax and Cowboy, they’d brought him into the conference room to meet Justice Royce. He looked so goddamn respectable sitting in the HERO Force conference room, he could have been on a commercial for a law firm.

That’s when the dirty laundry really got pulled out from under the bed.

Jax and Cowboy explained Royce was the judge who’d dismissed the criminal charges against them, and now he was getting death threats.

That’s when Logan started thinking of quitting his job. His bosses were no better than the dirtbags HERO Force was always fighting back against.

You can go back to the NSA.

Hell, there were a hundred and one jobs he was qualified for. That wasn’t the issue. The problem was he still wanted to work for the company he’d thought he was working for—where the men had integrity and fought for justice.

He hated himself in that moment. Hated the blind faith he’d allowed himself to have in these men. No wonder the other guys treated him like he was ten. He acted like a goddamn child.

Sure, he’d been working hard with Hawk, qualifying on weapons one by one, training in military strategy. But while he told himself it was just curiosity, the truth was he’d been trying to close the gap between him and the guys he looked up to. Especially Jax.

Jax, who was across the street at HERO Force headquarters with Justice Royce right now, probably getting their stories straight in case Royce was called to testify in the civil case. What a fucking joke.

You have a choice to make.

He could go to work on the Royce case like it was business as usual, or he could hand in his resignation. He took another sip of tequila.

I want out. Right. Fucking. Now.

No more HERO Force, no more Jax and no more trying to emulate people who weren’t even worthy of his attention.

The street noise got louder and Logan turned to see Jax walk into the bar. He sat down next to Logan and ordered a whiskey. “You okay?” he asked.

“Now that I know you killed a man?”

“I told you how it happened.”

“Yes, you did. Total accident. Could have happened to anybody.”

“This isn’t about me or Cowboy. This is about Royce. Someone related to the case wants him dead. That’s where your attention needs to be focused, not on something that happened years before your time that doesn’t affect you at all.”

“Right. Royce. The man who behaves like a close personal friend of yours, but is actually the judge who dismissed murder charges against you and Cowboy.”

“Because that would reek of impropriety on his part if he let his friends go free.”

Jax set his drink on the bar with a thud. “I’m still co-commander of this team. You’d do well to remember that.”

Logan knew he was pushing back too hard, but he couldn’t seem to stop talking, stop picking at the scab that covered Jax’s culpability.

He needed to see what was underneath, now that he knew his hero was made of flesh and blood. He had to know the depth of the darkness Jax had kept hidden from view. “I don’t want to work for a man I don’t respect.”

Jax stared at him for a beat. “It was an accidental shooting.”

Logan leaned in close. “Tell me what the fuck really happened, or I’m gone.”

Jax seemed to focus far away, the silence stretching out to an uncomfortable void. When he finally spoke, his voice was low. “We had no choice.” He met Logan’s eyes. “We did it because we had no choice.”

Jax shook his head. “All you need to know is none of this was Royce’s fault. Now someone wants him dead, and it’s our responsibility, Cowboy’s and mine. If we could solve this without involving you, we’d do it. But you’re the one with the skills we need, Logan. And you’re just going to have to decide if you trust me.”

“That’s where you’re wrong, Jax. You have to decide if you trust me.”

An intense light flashed brightly through the window over Jax’s shoulder, white light so bright it seemed to burn a hole in Logan’s retinas.

“Get down!” yelled Logan, lowering his own head as he pulled down Jax. The sound erupted and the shock wave hit, shattering the window into the bar, spraying glass like water from a sprinkler.

“Go, go, go!” barked Jax, but Logan was already on his feet, passing Jax as he pulled out his weapon. They ran into the blindingly sunny day, black smoke billowing from a sedan full of fire, fifteen-foot flames licking the sky.

A figure could be seen in the car, barely human, covered in flames, and Logan rushed to the vehicle in an instinctual move to help the victim. The heat burst forth as if from the gates of hell but still he reached for the door, jerking back his hand when it was instantly burned.

He was ambushed from behind, Jax screaming in his ear as he pulled Logan away from the car, “Get back! You can’t save them now.” But Logan could still see the person on fire—dying right before his eyes.

Logan’s eyes popped open, zeroing in on the piece of metal, a single word showing clear.

“It’s Royce,” said Jax, his voice like a sob. “The motherfucker got Royce.”

The smoke was noxious and Logan stumbled backward. He was inhaling the smell of gasoline and burning flesh, and he needed to vomit.

Sirens echoed in the distance.

There was nowhere to go, nothing to do but watch the car burn.

A firetruck arrived and firefighters hopped out, attacking the fire with long hoses until all that was left was a scorched black shell.

And what remained of a human being.

Logan had never been so close to death, seen it reach up from the depths of hell with gnarled fingers and rip someone from the earth. He thought of the man he’d just met upstairs and imagined his torched skeleton now covered in water.

He bent at the waist and threw up.

Cowboy boots appeared in his line of vision. “You need to find out who did this,” said Cowboy. He sighed heavily. “I know you think what we did was wrong. I could see it in your eyes. But the judge didn’t deserve to die like this.”

Logan righted himself and looked at the other man. There was emotion in Cowboy’s voice.

“He was an innocent man who spent his life fighting for good over evil and someone burned him alive. I know your sense of justice is reeling right now.” Cowboy pointed to the wreckage. “But that’s where your anger should be directed. That’s the greatest injustice of all. Help us catch the guys who did this, even if Jax and I aren’t the heroes you thought we were.”

It was a challenge. A request. A demand.

Jax crossed to them and narrowed his eyes at Logan, that steely stare that Logan had always found intimidating now seeming older, more pained. “Are you with us?” Jax asked.

They needed him. He was an integral part of this team, a vital gear in the machine that could find Justice Royce’s killer.

And Logan knew he would continue to work for HERO Force. He would find out who was responsible for this and do everything in his power to bring them down.

“Good.” Jax pointed out surveillance cameras. “I want video from those cameras, and I want it now.”